Happy Easter Blog Hop!
﻿Welcome to my little stop on the Happy Easter Blog Hop! I know many of you are looking for romance and I completely agree. I LOVE love! In fact, even though my book THE BLACKSMITH'S DAUGHTER is crossmarketed as a YA read, it's got a romantic subplot to go along with its fantasy. The romance element is YA appropriate mainly due to its sweet level.
I am also giving away a copy of THE BLACKSMITH'S DAUGHTER to one lucky winner who comments on this blog. Do be sure to leave me an email address and I love followers! Feel free to friend me as Arley Cole on Facebook. Meanwhile, my steamy alter-ego, Leigh Daley, is hard at work on the spicier side! Keep watching for her as well.
Thanks for dropping by and here's a little glimpse for you! 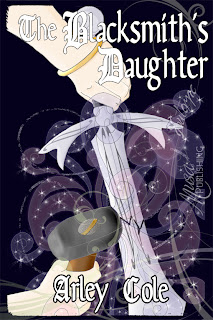 The Blacksmith's Daughter
She believes she is only a blacksmith's daughter, but he must discover
the truth or risk losing his land---and his life.

Acwellen Lex'Magen rules as liege lord of a small country bounded by forbidding mountains and powerful neighbors. When the neighboring baron, allied with a powerful wizard, attempts to take over his land, first by political, then by covert means, Acwellen finds an ally of his own in Enith Roweson, an unassuming blacksmith who possesses powers he's only known of in legends. As he attempts to unravel both the plots against him----including the nature of the monsters sent to assassinate him----and the mysterious powers Enith is only beginning to understand she has, he also finds himself falling in love with the blacksmith's daughter.

Don't feel lucky? Feel free to just buy a copy! Or read the sample for free!!
Thanks for dropping by! Now head back over to the Happy Easter Blog Hop by clicking here!
Posted by Leigh Daley/Arley Cole/me at 9:46 AM 23 comments: