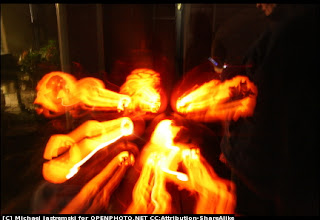 I recently had the chance to interview the super cool Clarissa Johal about her upcoming novel Between (Musa Publishing December 2012). Clarissa's blog "Writing with Scissors" is so much fun to read I wanted to be the first in line to talk to her about writing paranormal fiction.

Between is a paranormal novel, right? How do you approach the paranormal? What do you find interesting in this genre?
Between is a story of the paranormal, yes. I approach it in this novel as being a part of the protagonists “normal” world because she can see spirits; they disturb her but it isn’t unusual for her to see them. Personally, I’ve always felt there are many things in this world we have yet to understand. That’s how I approach writing the paranormal. Yes, it sounds fantastical, but who’s to say one person’s fantastical isn’t another person’s reality? And who’s to say their reality isn’t real?

I find the paranormal genre interesting because it leaves so much wide open as to what you can write about. Anything is possible. Plus, I feel that it’s becoming more widespread and acceptable to admit to believing in the paranormal. Kind of coming about full-circle, if you will. Five hundred years ago, people believed in ghosts, fifty years ago, not so much. Now, I think we’re kind of getting back to that belief stage but trying to “prove” through science that ghosts exist. I find it interesting.


What qualities does your lead have in Between that make him/her compelling to you? Why did you want to write his/her story?
Well, my two lead male characters wouldn’t leave me alone to write the YA novel I was working on. So, I have to say, I had no choice but to share their story! But Lucinda, my lead protagonist, believes whole-heartedly that everything can be saved. She’s a veterinarian, which is a quality you want in that field. I wanted to write her like that because it’s something that I feel people grow out of. As we mature, it becomes evident that every life can’t be saved, sometimes death takes a hand and takes it without our permission. I wanted Lucinda to still hold onto the belief that she could save every life. It’s what attracts my male antagonist to her because he’s coming from a period in time where nothing anybody did could spare the lives of those you loved.


That sounds really interesting to explore. I am particularly intrigued by the hint that he's not from around here, so to speak!
Tell me about the most unusual inspiration you’ve encountered. What’s the strangest thing that ever inspired a story in you?
I have to say, this story has been the strangest story to come about. Like I said, I was writing the second installment to my YA series and the two male characters kept popping into my head—to the point where I couldn’t concentrate on what I was working on. I knew they definitely didn’t belong in a YA novel. So, I started writing Between and it came fast. There were times I’d write for an eight hour stretch and go back to read what I’d written and not remember writing any of it. I’d dream in Gaelic and Latin, which I don’t know. I’d wake at two in the morning, write it down and look it up the next day to realize that some of the translation actually made sense. It sounds loony tunes, and I realize that, but that was my experience. There were historical details I wrote, and then in checking my facts later, were spot on. So, I don’t know. Strange way to write and definitely not the usual way I write.


Whoa! I never yet dreamed in a foreign language and I thought my dreams were trippy. That adds a whole fresh layer of paranormal to this book, Clarissa!
So, finally what’s the most unexpected place on earth you want to visit and why?

My friends and family know how much I love Scotland, especially the rainy, cool weather. But, I’ve always wanted to visit the Amazon rain forest. I’m not a fan of insects nor do I like the heat, but I would love to see and experience the wildlife there. My hobby is photography, so I would definitely take my camera with me.

Very neat place! But I agree with the savage bugs. I think I'll just join you on your next trip to Scotland instead!

So to whet everybody's appetite for more  Between, here's a taste of what's to come!

Coming from Musa Publishing on December 14, 2012

Since Lucinda was a young girl, she's been able to see spirits, a gift that didn't come without its problems. Now a dedicated young veterinarian, she is committed to the idea that everything can be saved. When Lucinda is involved in a car accident that kills her fiancé, she is devastated and moves to a small town to live a life of self-imposed exile. There, she meets a newcomer and feels an immediate connection with him.

However, there is another mysterious stranger to the small town, one that stirs within her a mixture of unease and desire. The spiritual activity around her intensifies as Lucinda is increasingly haunted by memories of the accident. As she is drawn into a bitter tug-of-war by the forces around her, she is likewise pulled into a dangerous twist of past and present events. Forced to make difficult choices, she surprisingly finds that the two men are locked in not only a battle for her life . . . but a battle for their salvation.